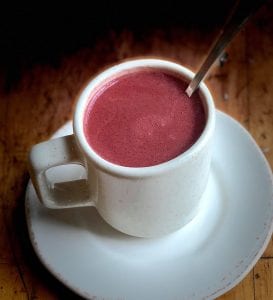 Is a hot chocolate recipe in April bad timing?  Not here in Indiana.  In the past week, we have had 6 inches of snow, a tornado, and now more snow.  Freezing rain is in the lineup.  So, instead of planting crops, I am creating hot chocolate recipes.  I’m sure glad I get to share this one now though because it’s fantastic!

I recently tried some products from Wild Foods.  I’ve been especially interested in their Cocotropic which is a blend of Wild Food’s organic cocoa powder with reishi mushroom extract, raw maca extract, chaga mushroom extract, and turmeric.  This fantastic product acts as a nootropic in addition to lots of other healthful properties.  A nootropic can be thought of as a supplement that has safe cognitive benefits.  It’s like “vitamins” for your brain.  Nootropics can improve concentration, enhance mood, and support relaxation.  I’ve been adding the Cocotropic to my morning coffee along with Wild Foods MCT Oil and collagen peptides. I’ve noticed an improvement in alertness and concentration in comparison to my MCT and collagen only morning brew.

I already include medicinal mushrooms, maca, and turmeric in my nutrition plan occasionally so I love the idea of getting them together along with the organic cocoa powder.   Medicinal mushrooms can improve mood and cognitive function.  Curcumin, the potent flavonoid that makes turmeric yellow, is a proven modulator of mood and cognitive function among many other benefits.

Maca is an adaptogenic herb that has shown to boost mitochondrial activity and slow cognitive decline.  Mitochondria are the energy centers in every cell of your body and their dysfunction is a hallmark of aging.  Scientific studies have shown maca supplementation improves cognitive function as well as increased motor coordination and physical endurance. 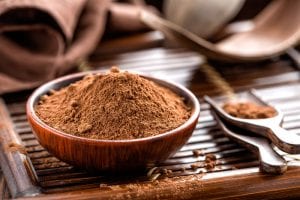 The cocoa powder itself contains a compound called theobromine.  It is a phytonutrient found primarily in cacao (chocolate.)  The name theobromine is derived from Theobroma, the name of the genus of the cacao tree, (which itself is made up of the Greek roots theo (“God”) and broma (“food”), meaning “food of the gods”.)

Theobromine has some of the positive effects associated with caffeine without the strong central nervous system effect many seek to avoid.  It can be stimulating, improving concentration, without affecting sleep patterns.

I added Wild Foods Cocoa Butter wafers to the recipe.  They add Vitamin E and other antioxidants as well as a decadent creaminess to this hot chocolate.

Finally, the surprise ingredient in here that makes this a red velvet hot chocolate is beet powder.  I’ve written about beets and cardiovascular health here on the blog.  This time I’d like to point out that the high concentration of nitrites in beets improve blood flow to the brain.

I hope you enjoy this cup of cognitive superpower as much as I do.

The recipe is simple.  Add your milk to a small saucepan and heat gently over low heat.  Add the rest of the ingredients and whisk until combined.  Enjoy!