Pesticides: Why You Need to Opt Out

“Someday we shall look back on this dark era of agriculture and shake our heads. How could we have ever believed that it was a good idea to grow our food with poisons?” —Dr. Jane Goodall 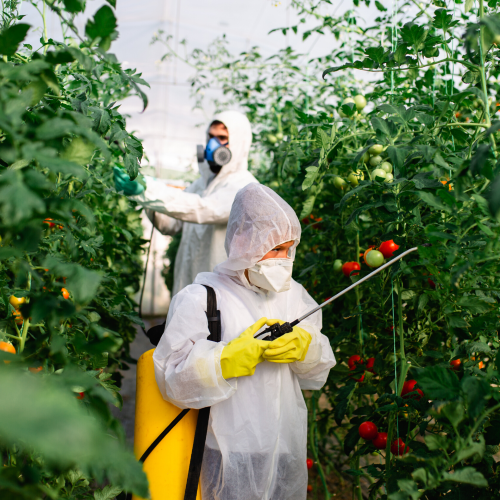 Pollution in plants includes the toxic pesticides used in growing the crops we eat. Pesticides are defined as “chemical substances used to prevent, destroy, repel, or mitigate any pest ranging from insects (i.e., insecticides), rodents (i.e., rodenticides) and weeds (herbicides) to microorganisms (i.e., algicides, fungicides or bactericides)”[1] It also means the industrial and transportation pollutants a plant takes up from polluted soil, air, and water. It would take a whole book to do justice to the full arsenal of pesticides used on the plants we eat.  Here, I will give you an overview of the history of pesticide use in the US, a deep dive on glyphosate and human health, a look at genetically engineered foods, and an overview on other pesticides of concern.

Pesticide use in the past 50 years has skyrocketed. A 2014 USDA study of the top 21 crops in the US (accounting for about 75% of the total pesticide use), shows a rapid rise from 1960-1981.  The total quantity of pesticides applied to the 21 crops analyzed grew from 196 million pounds of pesticide active ingredients in 1960 to 632 million pounds in 1981.[2] That’s a 322% increase in pesticides used in two decades. This coincides with the industrialization of farming.  Pesticides, especially herbicides, are a cheaper alternative to labor, fuel, and machinery in controlling pest populations. As farmers got big or got out, chemicals aided them in greatly increasing yield and fulfilling the consumer demand for an unblemished product while farming increasingly larger tracts of land with fewer and fewer people.

The USDA 2014 study of 21 crops reports 516 million active ingredient pounds used in 2008. The study also found that in 2008, just 5 crops (corn, soybeans, cotton, wheat, and potatoes) accounted for about 80% of the pesticide quantity applied to the 21 crops examined. [3] Even though those 5 crops are where most of the pesticides are going, rest assured that there is still plenty to go around. 70% of US grown produce tests positive for pesticide residues, even after washing, according to Environmental Working Group’s review of FDA and USDA stats.[4]

The pesticides used have changed significantly if we look back over the past 50 or so years. In 1960, herbicides accounted for 18% of the pounds applied but 76 % by 2008. By 1980, herbicide use had reached 90-99% of U.S. corn, cotton, and soybean acres planted. The rise in herbicides, including the top four most used pesticide active ingredients in 2008 (glyphosate, atrazine, acetochlor, and metolachlor), is largely due to the rise of the “Roundup Ready” genetically engineered crops by Monsanto.[5]  These crops are also referred to as genetically engineered HT (herbicide tolerant) crops. Glyphosate is the active ingredient in the ubiquitous herbicide Roundup. Glyphosate resistant corn, soy, and cotton were released by Monsanto in 1996. This innovation was transformational to agriculture and to our health. These seeds were genetically engineered so that the plants could be sprayed by glyphosate, but not die.

Glyphosate was put on the market originally in 1970 by Monsanto and it had a growing market but built in limitations.  Glyphosate was a broad-spectrum herbicide that kills all vegetation it comes into contact with. That’s why the advent of genetically engineered HT crops was such a seismic change in industrial farming and in Monsanto’s bottom line.  Not only was a company, Monsanto, allowed to patent a seed (life) for the first time, but they could now sell you the magic seeds that would not die when sprayed with their magic poison potion. This meant farmers could now spray their fields at any time with the glyphosate in Roundup and have weed-free fields.  Glyphosate quickly became the go-to herbicide of choice.  Both HT alfalfa and sugar beets have now been added to the list of glyphosate tolerant crops.

Globally, glyphosate use has risen almost 15-fold since “Roundup Ready,” genetically engineered glyphosate-tolerant crops were introduced in 1996. Two-thirds of the total volume of glyphosate applied in the U.S. from 1974 to 2014 has been sprayed in just the last 10 years.[8] Now, we have increasing issues with glyphosate-resistant weeds.  There is a recurring theme in industrial agriculture. We continually underestimate nature.  As these “superweeds” create havoc, the responses have been a ratcheting up of this herbicide arms race.  Farmers are using more Roundup and more often, using what may be even more dangerous chemicals, and companies are working on developing crops resistant to other herbicides. It’s an herbicide arms race and we are the losers. Now, there are new HT seeds on the market that combine resistance to multiple herbicides and more are on the way.

What does the dominance of glyphosate mean for us? It means that glyphosate has found its way into just about everything, including us. A study by the University of California San Francisco found glyphosate in the urine of 93% of Americans.[9] It is even detected in cord blood of newborns. It’s also found in our food, our water, and our soil. We have already discussed the extent to which genetically engineered crops like soy and corn dominate agriculture and our foodshed. Because crops can be sprayed with glyphosate directly, it has a more direct route into our foods.  Sometimes, glyphosate is even used right before harvest to desiccate (dry) a grain (like oats) to aid in harvesting.[10] When the Environmental Working Group (EWG) tested 28 oat-based breakfast cereals and other foods for glyphosate residue, every single one of them tested positive.  26 out of 28 tested for more than 160 parts per billion (the level of concern set by EWG.)[11]

We would like to think that all the toxins we spray on our foods just get washed away, but that’s magical thinking.  Even if they get washed away, they end up in our soil and water. There is no place for them to safely go, because they aren’t safe. It was thought that herbicides like glyphosate had a short half-life and would break down quickly. We now know they can persist much longer. Depending on conditions, the half-life can be as much as a year.[12]  We also know that some segments of our population are more likely to be harmed by pesticide residues.  Children (including developing fetuses) and those who are critically ill are at greater risk.  People like me, with a history of autoimmune/chronic disease are canaries in a coal mine and need to be especially careful.

What is the effect of glyphosate on humans? A 2019 meta-analysis concludes that glyphosate increases risk of non-Hodgkin lymphoma by 41%.[13] In 2019, researchers at Purdue University helped discover that the most aggressive form of breast cancer can be caused by glyphosate.[14]

The World Health Organization declared glyphosate a probable human carcinogen inn 2015. California followed suit.  The EPA has not. 19 countries have banned or severely restricted glyphosate-based herbicides as of this writing as have numerous cities across the US. Recently, US courts have awarded millions of dollars to individuals who sued Bayer (owners of Monsanto) for their glyphosate caused cancer. Tens of thousands of additional suits are in progress. It looks like the downfall of glyphosate may come from the courts and not from the EPA stepping up to protect consumers.

A 41% increased cancer risk is reason enough to be concerned about glyphosate, but the problems don’t stop there. Science has shown glyphosate to have a number of frightening effects. We don’t yet have all the science, but some of the terrifying effects linked to glyphosate include:[15] (unless where noted)

Since our focus is on digestive health, let’s dig into the effects of glyphosate on our microbiome.  Glyphosate, an antimicrobial agent, changes both the balance among species and the ability to function of our microbiome—skewing it and us toward disease.[17] We already know our microbiome is the center of our health and we need to do our utmost to protect and strengthen it so anything that impairs function is a major concern. Glyphosate disrupts something called the shikimate pathway. Plants and some microorganisms have this enzymatic pathway and it allows for the production of three essential amino acids (building blocks of proteins).  Blocking the shikimate pathway is how glyphosate kills plants. Animals (including us) do not have this pathway and so it was assumed that glyphosate does not affect us. But, we know that as humans we are ecosystems, not solitary beings. Many inhabitants of our microbiome are affected. Shikimate pathway impaired gut microbes translate into a very long list of ill effects for us.  Reduced ability to make serotonin and melatonin is one. Severe depletion of manganese is another.[18] There are many more.

Research has been focused on glyphosate itself, but little on Roundup and other glyphosate-based herbicides as a whole.  There are many “inert” (meaning they are not a herbicide) ingredients which we have been told have no effect on human health.  Now, we know that is not true.  One ingredient, in particular, POEA has been found to be more deadly to human embryonic, placental, and umbilical cord cells than the herbicide itself.[19] Roundup has been found to be 125 times more toxic than glyphosate itself.[20]

Glyphosate is not the lone pesticide in heavy usage.  Here are some other pesticides currently in use: (far from a complete and detailed list)

*Because of growing glyphosate tolerance by weeds, 2, 4-D is combined with glyphosate in a herbicide called Enlist.  Enlist-resistant crops are now on the market.

Few people are untouched by pesticide exposure. They may be exposed through food, water, air, or direct contact with pesticides or residues. However, given that most diseases are multi-causal, and bearing in mind that individuals tend to be exposed to a complex mixture of chemicals in their daily lives, establishing a direct causal link between exposure to pesticides and their effects can be a challenge for accountability and for victims seeking access to an effective remedy. Even so, persistent use of pesticides, in particular agrochemicals used in industrial farming, have been connected to a range of adverse health impacts, both at high and low exposure levels.[26]